Divorced in Thailand can be costly if there is a dispute over custody of the children or real estate. The trend in Thailand tends to be divorces by mutual agreement. It is case both parties decide to move apart and they draft a divorce agreement. This is simple enough and does not cost much as it does not go to court as in the West.

This simple gets filed as the District Office or Amphurs Office in Thailand. Divorce litigation however appears to be more common with foreigners. Much like any other legal matter you always need to take legal advice from a family lawyer in Thailand. Always take proper legal advice when dealing with a divorce in Thailand.

The grounds for divorce in Thailand are listed in the Civil and Commercial Code of Thailand. Below would be the most common reasons for a divorce and many normally place two of these reasons on the divorce papers.

These would normally be the grounds for applying for a divorce. Note however that there also the most common defences in a divorce as if the divorce is not defended you Thai spouse could file for damages. These are the basic defences listed below.

As stated that normally divorces in Thailand are defended to ensure only that an order for damages is not filed in the process leaving you financial destroyed. If you leave a divorce undefended this could destroy you financially as it simply does not go away. Note however that a ‘village wedding’ is not legally binding and as long as the marriage was not registered with the government then you are not legally married and hence don’t need a divorce.

Divorce agreements are normally the fastest and least costly divorce in Thailand when drafted properly by an attorney. You will have to speak to a family lawyer in Bangkok as to what you are willing to compromise on if you are going to negotiate a settlement. Going to litigate and spending thousands of baht on small items such as a motorbike would make no sense. Many times in Thailand a bit of “horse trading” gets things done easier. Disputes tend to be mainly over children and property. This can be difficult however it is always best to take legal advice on issues such as child custody and property. 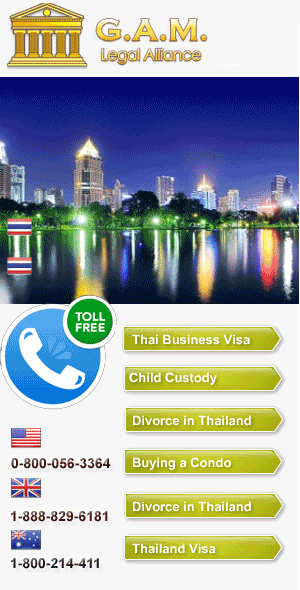